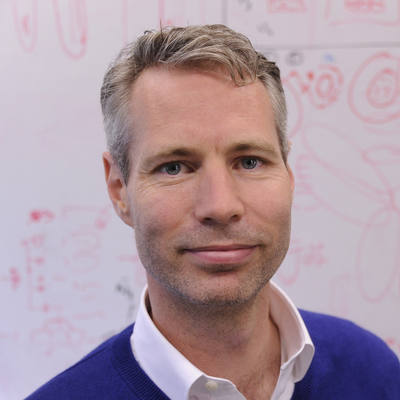 Gavin Wright moved to the University of York in 2021. To find out more about his ongoing research, please visit: https://www.york.ac.uk/biology/our-staff/gavin-wright/ and https://pure.york.ac.uk/portal/en/researchers/gavin-james-wright(7c9756f5-9f6c-42ef-877b-bffc627cdafd).html

Gavin is interested in the molecular basis of cellular recognition events. The goals of his research are to obtain a mechanistic understanding of how cells interact both within our own bodies and with pathogens. Ultimately, this knowledge will inform the rational design of intervention strategies for the treatment and prevention of genetic and infectious diseases.

Gavin graduated from the University of Oxford with a degree in Biochemistry in 1996 before studying for a D.Phil. within the Medical Research Council (MRC) Cellular Immunology Unit with Professor Neil Barclay at the Sir William Dunn School of Pathology.

He initially worked on CD200 (formally OX2), a cell surface protein expressed in both the immune and nervous systems and discovered its receptor, which was found to be restricted to myeloid-lineage cells. Together with collaborators, Gavin’s team showed that endogenous CD200 and also close homologues of this protein which had been captured by both pox and herpes viruses delivered restrictive signals to macrophages to locally suppress their activation. It is these studies that sparked his broad interests in cell surface receptor proteins and their role in cellular signalling and recognition processes. For his postdoc, Gavin worked with Dr Julian Lewis at Cancer Research UK, London where he studied the Notch signalling pathway, using the zebrafish model organism.

His research at the Wellcome Sanger Institute has focused on taking large-scale systematic approaches to identify novel receptor-ligand pairs that initiate intercellular signalling. In particular, Gavin is interested in the low affinity interactions that are a common feature of cell surface receptor interactions and develops new methods to identify this type of binding event which cannot be easily detected using other scalable techniques. The laboratory has identified many novel receptor-ligand pairs including Juno-Izumo, which is essential for mammalian sperm-egg recognition, and RH5-basigin that is required for the invasion of blood cells by the malaria parasite.

Video: Discovery of the RH5-basigin interaction

Video: Discovery of Juno and its role in fertilization