Analyses of the complete genome sequence will significantly add to our knowledge of chromosomes, including more accurate maps for five chromosome arms, which opens new lines of research. This helps answer basic biology questions about how chromosomes properly segregate and divide. The T2T consortium used the now-complete genome sequence as a reference to discover more than two million additional variants in the human genome. These studies provide more accurate information about the genomic variants within 622 medically relevant genes.

“Generating a truly complete human genome sequence represents an incredible scientific achievement, providing the first comprehensive view of our DNA blueprint. This foundational information will strengthen the many ongoing efforts to understand all the functional nuances of the human genome, which in turn will empower genetic studies of human disease.”

“The first human reference genome assembly took decades to generate and refine and still didn’t reach completion. It is absolutely amazing to see that sequencing and assembly technologies have now moved us to a place where a complete and correct assembly can be created in weeks. For the first time ever, we are now able to analyze a human genome in its entirety and produce many more at this level of quality.”

The full sequencing builds upon the work of the Human Genome Project, which mapped about 92 per cent of the genome, and research undertaken since then. Thousands of researchers have developed better laboratory tools, computational methods and strategic approaches to decipher the complex sequence. Six papers encompassing the completed sequence appear in Science, along with companion papers in several other journals.

That last 8 per cent includes numerous genes and repetitive DNA and is comparable in size to an entire chromosome. Researchers generated the complete genome sequence using a special cell line that has two identical copies of each chromosome, unlike most human cells, which carry two slightly different copies. The researchers noted that most of the newly added DNA sequences were near the repetitive telomeres (long, trailing ends of each chromosome) and centromeres (dense middle sections of each chromosome).

The cost of sequencing a human genome using “short-read” technologies, which provide several hundred bases of DNA sequence at a time, is only a few hundred dollars, having fallen significantly since the end of the Human Genome Project. However, using these short-read methods alone still leaves some gaps in assembled genome sequences. The massive drop in DNA sequencing costs comes hand-in-hand with increased investments in new DNA sequencing technologies to generate longer DNA sequence reads without compromising the accuracy.

“Using long-read methods, we have made breakthroughs in our understanding of the most difficult, repeat-rich parts of the human genome. This complete human genome sequence has already provided new insight into genome biology, and I look forward to the next decade of discoveries about these newly revealed regions.”

The National Human Genome Research Institute (NHGRI) is one of the 27 institutes and centers at the NIH, an agency of the Department of Health and Human Services. The NHGRI Division of Intramural Research develops and implements technology to understand, diagnose and treat genomic and genetic diseases. Additional information about NHGRI can be found at: www.genome.gov.

The National Institutes of Health (NIH) is the nation’s medical research agency, includes 27 institutes and centers and is a component of the U.S. Department of Health and Human Services. NIH is the primary federal agency conducting and supporting basic, clinical and translational medical research, and is investigating the causes, treatments and cures for both common and rare diseases. For more information about NIH and its programs, visit www.nih.gov. 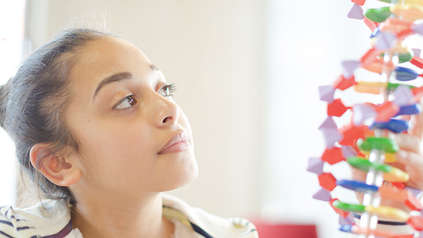