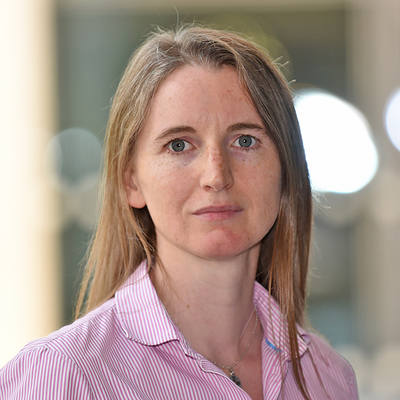 I left the institute on the 25th August 2021 after 7 years working with Open Targets, first as a post-doc and then as an operations manager. I am leaving to continue theology college training full time.

Sarah was an Operations Manager for Open Targets, an innovative, public-private partnership that uses human genetics and genomics data for systematic drug target identification and prioritisation. She originally joined the Sanger Institute as a post-doctoral statistical geneticist working on the genetics of complex diseases with a focus on Inflammatory Bowel Disease (IBD). In particular, utilising fine-mappng data to infer genes that are potential drug targets.

I have a molecular biology background and moved from the laboratory bench into statistical genetics during my PhD, which focused on the genetic analysis of the Colorectal Cancer genome-wide association study (GWAS). Since then, I have developed my analytical skills through two post-doctoral positions at King’s College London. I have worked with GWAS, Immunochip finemapping and exome chip genotype data for a variety of international collaborative projects in complex diseases such as psoriasis, cognitive ability and Inflammatory Bowel Disease.

My scientific interests are focused on the genetic differences between individuals that confer an increased susceptibility to common diseases. In my research, as part of Open Targets, I utilised publically available and in-house tools to analyse large scale genetic data with the aim to identify target genes that may have therapeutic potential for diseases, such as IBD. I later moved into a research administrator role to facilitate the smooth running of Open Targets research projects.