Study sheds light on why immunodeficiency affects only one identical twin

Scientists have long queried the causes of immune disorders in only one of two identical twins with identical genes. New research from the Wellcome Sanger Institute, the Josep Carreras Leukaemia Research Institute in Spain and their collaborators, has found the answer lies in both alterations in immune cell-cell communication and the epigenome, the host of biological processes that regulate how our genes function.

The study, published today (1 April) in Nature Communications, is the first cell atlas to categorise common variable immunodeficiency (CVID) at the single-cell resolution. Researchers found that ‘communication problems’ resulting from defects in B cells and other immune cell types impaired immune response, highlighting a number of pathways that are promising targets for epigenetic treatments. In addition, they also identified major defects in the epigenome.

The Human Cell Atlas is an international collaborative consortium that charts the cell types in the healthy body, providing an unprecedented resource for studying health and disease.

Common variable immunodeficiency (CVID) encompasses a range of immune disorders caused by a reduced ability to produce protective antibodies, which leaves the individual vulnerable to persistent or repeated infection. These individuals usually have low levels of immunoglobulin, more commonly known as antibodies, due to problems with the B cells that create them.

Though identical twins share the same genome, most will be born with a small number of genetic and epigenetic differences and the number of variations will increase over their lifetime. But where one twin experiences a health problem that their sibling does not, in most cases genetic differences alone cannot explain why this has occurred.

Around 20 per cent of CVID cases can be attributed to a defect in a gene associated with the condition. But with four in five cases remaining largely unexplained, scientists have predicted that other factors must be involved. This was confirmed by a recent study, which linked CVID to DNA methylation, an epigenetic process that turns the level of a particular gene up or down1.

In this new study, researchers from the Wellcome Sanger Institute and the Josep Carreras Leukaemia Research Institute generated single-cell data to investigate epigenetic factors involved in CVID. Samples were taken from a pair of identical twins, only one of whom suffered from CVID, as well as a wider group of CVID patients and healthy individuals.

Analysis of the identical twin participants found that not only did the sibling with CVID have fewer B cells, but that B cell defects resulted in epigenetic problems with DNA methylation, chromatin accessibility and transcriptional defects in memory B cells themselves2. In addition, researchers found massive defects in the cell-to-cell communication required for the immune system to function normally.

“The human immune system is not a static entity and communication between immune cells is vital for it to work effectively. We can see in healthy individuals how cells talk to each other and from there identify where communication breaks down in individuals with common variable immunodeficiency (CVID). In the immune system this cell-to-cell communication is critical to define the ability of B cells to mature and produce antibodies.”

The researchers compared the epigenetic changes and cell-to-cell communication problems found in the twin suffering from CVID against a wider CVID cohort and found that the problems were the same, providing a solid model for characterising the disease. The challenge now will be to use these insights to develop new treatments.

“This is the first of many studies that will look at common variable immunodeficiency (CVID) and other primary immunodeficiencies in the attempt to identify new therapies for treating these disorders. We already have viable options, such as immunoglobulin replacement therapy, which I would hope can be adapted to address the specific B cell defects that we have identified here.”

As well as immunoglobulin replacement therapy, epigenetic drugs can also be used to treat immune disorders and the findings of this study highlight a number of biological pathways worthy of further investigation for new drug targets.

“This is the first cell atlas to categorise common variable primary immunodeficiencies and will be a valuable contribution to the Human Cell Atlas initiative to map every cell type in the human body. What this study in particular shows is how quickly cell atlas data can be applied to better understand specific health challenges and open up new avenues of treatment.”

2 Chromatin is a complex of DNA and proteins. It forms the structure in which genetic information is packed.

This research was supported by Wellcome; the Josep Carreras Foundation; the Spanish Ministry of Science, Innovation and Universities; UK Biotechnology and Biological Sciences Research Council, the Jeffrey Modell Foundation and the Medical Research Council. 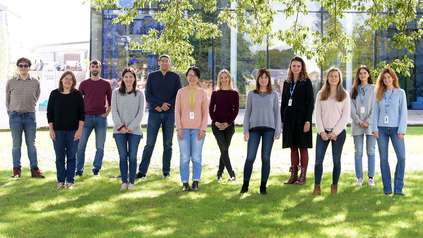 Mapping the endometrium, cell by cell

Dr Roser Vento-Tormo tells us about her work to map the cells lining the uterus in space and time, how it ...