Epigenetic mechanisms in health and disease

This page is being maintained as historical record of the work of Adrian Bird’s Associate Faculty Group at the Wellcome Sanger Institute and is no longer being updated.

Adrian's research group is interested in the way chemical marking of chromosomes influences genome activity in normal cells and in disease. In particular, the team focuses on:

To read more about these projects, please click on 'Read more'.

Ever since the realization that transcription is not confined to protein-coding regions of the genome, there has been considerable interest in the function non-coding RNAs. We have mapped a set of lncRNA transcription units that originate with CpG island promoters and are testing their function by disrupting transcription in mice. We aim to test whether the RNA itself is functional or if the act of transcription itself is key.

A small minority of genomic DNA is copied to give messenger RNAs that are then translated to make proteins. The rest of the genome was once thought to be “junk” but there is now evidence that it contains extra RNA genes whose purpose is unknown. In order to further annotation of the genome it is important to test the role of these so-called “long non-coding RNAs” (lncRNAs). Most gene promoters are located within DNA sequences that are atypical in composition, called “CpG islands”. We examine on a relatively large scale the functional significance of lncRNAs that initiate within CpG islands, using mice as a model system.

The effects of a methylated DNA binding protein on gene expression

Methylation of DNA creates a signal that is read by attraction or exclusion of DNA binding proteins. One such protein is MeCP2, which binds methylated DNA and recruits gene-silencing machinery. Deficiency or excess of this protein causes autism spectrum disorders. To dissect its function we are studying gene expression in large numbers of cultured human neurons at the level of the single cell. In this way we hope to explain the role of MeCP2 in the healthy or autistic brain.

Deficiency of MeCP2 causes Rett Syndrome, whereas its excess causes MeCP2 Duplication Syndrome. The level of MeCP2 expression is therefore of critical importance for brain function, both during development and in the adult brain. MeCP2 is a chromosome binding protein that affects gene expression, but our understanding of its detailed role in the brain remains sketchy. We hope to develop a cultured cell assay using neurons that may replace the mouse as an assay for this disorder and lead us to underlying mechanisms. 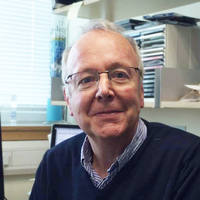 Adrian's research focus explores the way chemical marking of chromosomes influences genome activity in normal cells and in disease. As a member of Associate Faculty he pursued research projects in collaboration with Sanger scientists, taking advantage of the Institute's strength in large-scale genetics and genomics.

The Mouse Pipelines team supported biomedical research through the humane and optimized use of genetically-modified mice.