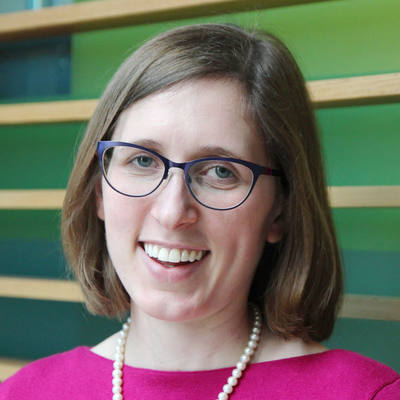 Hilary's work focuses on the analysis of high-throughput sequence and genotype data from large cohorts to address various medical and population genetic questions. Her group studies the genetic architecture of rare and common disorders in diverse populations, as well as the structure and history of those populations.

In 2011, after my undergraduate studies in genetics at the University of Queensland, I started my PhD with Peter Donnelly at the Wellcome Trust Centre for Human Genetics in Oxford. There, I worked on an eclectic set of projects. As part of the WGS500 project (clinical whole-genome sequencing of various disorders), I analysed data from families with severe neurological diseases, and also evaluated different approaches for pinpointing causal mutations. I also conducted a meta-analysis of multiple cohorts in order to address the effect of maternal age on recombination rates, which had previously been controversial. Finally, I worked on population sequencing study of the platypus to investigate the population structure and history of this unique species, as well as its ten sex chromosomes.

I moved to the Sanger Institute in 2016 as a postdoc with Jeff Barrett. My major focus was on exploring genetic architecture in the Deciphering Developmental Disorders (DDD) study, a large cohort of exome-sequenced individuals with rare developmental disorders. Specifically, I looked at the role of rare recessive variants and polygenic risk.

I became a Group Leader in Human Genetics in September 2018. My group analyses large-scale genetic and electronic health record data to explore fine-scale population structure, its impact on disease risk, and the genetic architecture of both rare and complex diseases. We have a particular focus on populations with high levels of parental relatedness (consanguinity).

Just 1 week left to apply for this postdoc position in my group looking at sex differences in autism in collaboration with @ARC_Cambridge @warrier_varun @sbaroncohen @mehurles . Please forward to good candidates!