Genome editing in humans: Call for global moratorium on clinical use of germline editing

Below is the Wellcome Sanger Institute’s response to a call in the journal Nature for a global moratorium on the clinical use of germline genome editing. This type of genetic alteration would result in changes that could then be passed from generation to generation.

The five-year moratorium proposed in Nature specifically focuses on preventing the clinical use of germline genome editing. It would still allow genome editing to alter non-reproductive cells to help treat a person’s pre-existing condition because these changes cannot be passed on to future generations. In addition, the proposal would allow researchers to continue to use genome editing in the laboratory to explore the biological processes at work at the earliest stages of human development. 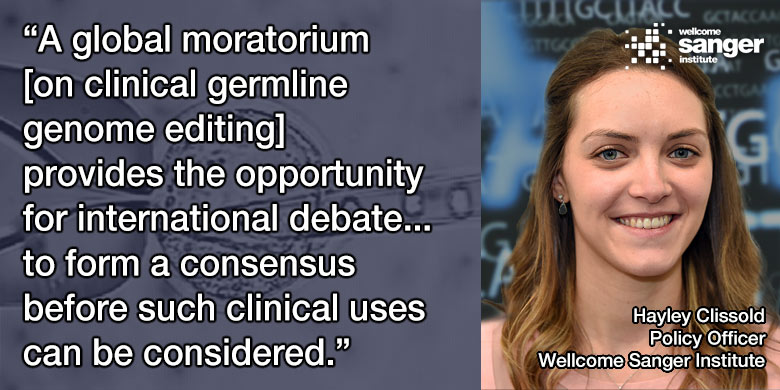 Germline editing is an exciting technology with the potential to improve human health and eliminate certain genetic diseases.

Recently, a Chinese scientist shocked the world when he announced the birth of twin girls whose genomes he had edited with the intention of giving resistance to HIV. This reinforced the need for an open, transparent and international debate on germline editing. In response, the World Health Organization has formed an expert advisory committee to develop global standards for governance and oversight of human genome editing.

On Wednesday 13 March 2019, 18 scientists and ethicists from seven different countries called for a global moratorium on all clinical uses of human germline editing. They propose a framework for addressing the technical, societal and ethical concerns in an open and transparent manner with a variety of stakeholders within each nation. 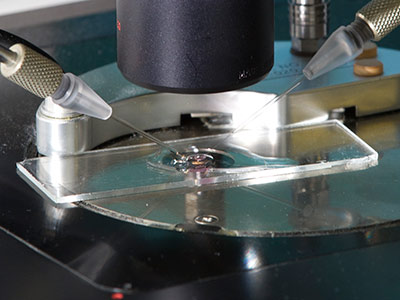 Before germline editing can be used clinically in humans, the Wellcome Sanger Institute believes that further vital research must be undertaken to understand the scientific, technical and medical issues associated with these technologies as well as the societal, ethical and moral implications of altering the human germline.

A global moratorium provides the opportunity for international debate among scientists, ethicists, policymakers, the public and other key stakeholder groups to form a societal consensus before such clinical uses can be considered. A structured framework for implementation of the moratorium is required for it to be effective. This must include regulations to prohibit unethical and unregulated clinical applications of germline editing from being pursued under the radar, outside of ethical practices and without significant engagement with fellow scientists and other key stakeholders.

More on genome editing from the Wellcome Sanger Institute